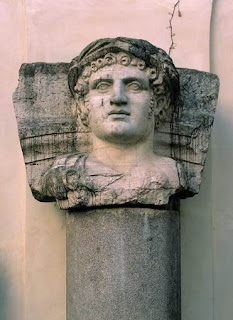 Volturnalia was the Roman festival on August 27 dedicated to Volturnus, 'god of the waters,' god of fountains. Volturnus was a tribal river god who later was identified as god of the Tiber river. The Volturno River, in southern Italy, is named for him. Volturnus was the father of the goddess Juturna, who was first identified with a spring in Latium near the Numicus River and later with a pool near the Temple of Vesta in the Forum of Rome. They were both honored on this day with feasting, wine-drinking, and games.

Little is known about Volturnus, although scholars have attempted to reconstruct his myth and role in the cultus deorum. Volturnus is known to have been an agricultural God, and surviving fragments show he was specifically a river God.

Like other ancient Gods, his cult was overshadowed and obscured by a religious reformation, probably in the 4th century BCE. By the time of Varro (116 BCE - 27 BCE), a scholar who collected the surviving materials, there were only traces left of Rome's earliest religion. He reported the survival of a Flamen Volturnalis, but found the God to be "obscure".

No myths concerning Volturnus have survived. A minority view among scholars is that Volturnus was a generic God of rivers, and gave his name both to the Tiber and the Volturno. Also it has been theorized that the Romans might have equated Volturnus with Vulturnus, as evidenced by this passage from Lucretious:


Inde aliae tempestates
ventique secuntur,
altitonans Volturnus
et Auster fulmine pollens.
And other Winds do follow: the high roar
Of great Volturnus, and the
Southwind strong
With thunder-bolts.
Vulturnus' Greek analog was Eurus (Εύρος), the God of the east wind, and a son of Eos, possibly by Astræus. In Italy, the Vulturno, now called the Scirocco, blows from the southeast. The Vulturno takes its name from Monte Vulture (anc. Vultur).

Those who equate Volturnus with Vulturnus believe that the Volturnalia was a festival to avert the drought caused by these drying winds.

However, most contemporary scholars separate Volturnus the river from Vulturnus the east wind, and point to the timing of the Volturnalia at harvest time as evidence that it would have been offered in thanks for the irrigation water drawn from rivers rather than as a supplication to avert drought.

Sources: Wikipedia and NovaRoma
Posted by Shirley Twofeathers at 1:39 AM