The Vertumnalia, observed on August 13, is the festival of Vertumnus, the Roman divinity of seasons, changes and ripening of plant life. He is the patron of gardens and fruit trees. He could change his form at will, and used this power to trick the dryad (wood nymph) Pomona, the patron of orchards and gardens, into becoming his wife by disguising himself as a crone. 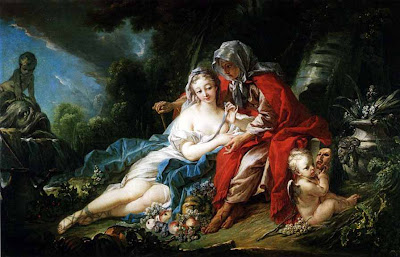 The story is as follows:

The Fauns and Satyrs would have given all they possessed to win Pomona, and so would old Sylvanus, who looked young for his years, and Pan, who wore a garland of pine leaves around his head. Pomona was determined to remain independent and rejected every advance. Vertumnus loved her best of all; yet he fared no better than the rest. He tried many disguises with no success. One day, however, he came to her orchard in the guise of an old woman, her gray hair surmounted with a cap, and a staff in her hand. She entered the garden and admired the fruit. "It does you credit, my dear," she said, and kissed Pomona, not exactly with an old woman's kiss.

She sat down on a bank, and looked up at the branches laden with fruit which hung over her. Opposite was an elm entwined with a vine loaded with swelling grapes. She praised the tree and its associated vine, equally. "But," said Vertumnus, "if the tree stood alone, and had no vine clinging to it, it would lie prostrate on the ground. Why will you not take a lesson from the tree and the vine, and consent to unite yourself with some one?

He spoke to her about the benefits of the right alliances "...if you are prudent and want to make a good alliance, and will let an old woman advise you, who loves you better than you have any idea of, dismiss all the rest and accept Vertumnus, on my recommendation. I know him as well as he knows himself. He is not a wandering deity, but belongs to these mountains. Nor is he like too many of the lovers nowadays, who love any one they happen to see; he loves you, and you only.

Add to this, he is young and handsome, and has the art of assuming any shape he pleases, and can make himself just what you command him. Moreover, he loves the same things that you do, delights in gardening, and handles your apples with admiration. But NOW he cares nothing for fruits, nor flowers, nor anything else, but only yourself.

Take pity on him, and fancy him speaking now with my mouth. Remember that the gods punish cruelty, and that Venus hates a hard heart, and will visit such offenses sooner or later. To prove this, let me tell you a story, which is well known in Cyprus to be a fact; and I hope it will have the effect to make you more merciful.

Vertumnus goes on to tell the story of Iphis and Anaxarete, a narrative warning of the dangers of rejecting a suitor. And, when he had finished with the story, he revealed himself to Pomona:

When Vertumnus had spoken thus, he dropped the disguise of an old woman, and stood before her in his proper person, as a comely youth. It appeared to her like the sun bursting through a cloud. He would have renewed his entreaties, but there was no need; his arguments and the sight of his true form prevailed, and the Nymph (Pomona) no longer resisted, but owned a mutual flame.

Collected from various sources including Wikipedia
Posted by Shirley Twofeathers at 4:15 AM

Email ThisBlogThis!Share to TwitterShare to FacebookShare to Pinterest
Labels: August Spells and Rituals, Myths and Legends