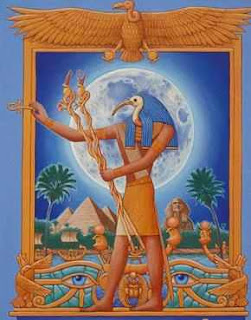 Thoth, Lord of Books, Lord of Divine Words, is primeval. He is from before Creation. In some Egyptian myths, Thoth is the supreme creator. He created himself by speaking his own name. Even when he is not supreme creator, Thoth still does his fair share of creating. Thoth invented writing, gambling, star-gazing, engineering, geometry, botany, medicine, mathematics, and magic spells. He is the founder of alchemy and is the author, according to Egyptian myth, of the world's very first book called The Book of Thoth, a collection of magic spells and rituals so powerful that it had to be hidden away.

Thoth taught veneration of the spirits. He invented rules of sacrifice and composed hymns and prayers. Thoth is credited with writing some of the Egyptian Book of the Dead: The Book of Going Forth by Day.

Thoth is Ra's right-hand man. Without Thoth, Isis and her siblings would never have been born. Thoth may have taught Osiris the arts of civilization that Osiris then taught to humanity. Thoth, a master magician, taught Isis everything he knew. She is perhaps the only one who surpasses his magical knowledge, although, according to myth, even Isis still needs his assistance and advice once in a while.

Thoth is kind, benevolent, patient, wise, and generous. He is what is considered a "cool" deity. He calms and soothes impassioned situations. In one legend, only Thoth can safely subdue a rampaging goddess threatening to destroy Earth.

As befitting a shaman, Thoth lives in many realms at once:


The English name, Thoth, is based on the Greek pronunciation for the Egyptian Tehuti. His name is related to Egyptian words indicating "moon," "measure," "ibis," and "crystal." The Greeks identified Thoth with Hermes and Hermes Tristmegistus.

Manifestation: In his guise as patron of scribes, Thoth has an ibis head. As a master magician, he manifests as a baboon. Although ibis and baboon are his most common forms, Thoth is a master shape-shifter. He could be anything or anyone.


From: Encyclopedia of Spirits

Posted by Shirley Twofeathers at 1:39 AM

Email ThisBlogThis!Share to TwitterShare to FacebookShare to Pinterest
Labels: Egyptian Gods and Magick, Gods and Goddesses