The Blessing of the Boats

August 12 is the Egyptian "Blessing of the Boats." At least, so they say. I've found this date listed on quite a few pagan and Egyptian feast day and festival calendars. However, when I researched it, I did not find anything else other than those brief mentions. 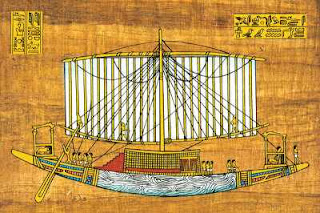 What I did find was that most of the Ancient Egyptian public religious ceremonies traditionally included plenty of beer drinking and revelry. The populace as a whole became involved during the festivals, which were a time of indulgence for the ordinarily frugal Egyptians. For example, at the Ramesseum during the three week long Opet festival 11,400 bread loaves and cakes were baked and eaten, 385 measures of beer were consumed as well as considerable amounts of meat, wine, fruit. The Sokar festival lasted ten days with a consumption of 7400 loaves of bread and cakes and 1372 measures of beer.

Heroditus, in his histories, has this to say about one Egyptian Festival day:

Now, when they are coming to the city of Bubastis they do as follows: they sail men and women together, and a great multitude of each sex in every boat; and some of the women have rattles and rattle with them, while some of the men play the flute during the whole time of the voyage, and the rest, both women and men, sing and clap their hands; and when as they sail they come opposite to any city on the way they bring the boat to land, and some of the women continue to do as I have said, others cry aloud and jeer at the women in that city, some dance, and some stand up and pull up their garments.


This they do by every city along the river-bank; and when they come to Bubastis they hold festival celebrating great sacrifices, and more wine of grapes is consumed upon that festival than during the whole of the rest of the year.

And so, with that in mind, here's a YouTube video from New Orleans with what they claim is a boat blessing the way it "should" be done.

Most boat blessings, however, are taken more seriously.
~Collected from various sources.
Posted by Shirley Twofeathers at 1:57 AM

This is such a good stuff and keep up the good work. I read a lot of blogs on a daily basis and for the most part just wanted to make a quick comment to say I’m glad I found your blog and I am happy to come again to see new post.