Rowan wood is among those special botanicals most closely identified with the magical arts. Its nickanme, "Witch wood," indicates that rowan places witches' power into your hands. 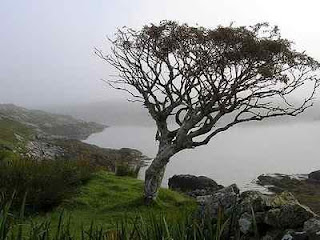 Witch wood repels malevolent enchantment and guards against malevolent spirits and ghosts. No nickname is needed, however, to emphasize rowan's magical roots: related words include the Norse "runall" meaning "a charm" and the Sanskrit "runall" indicating "Magician." In Norse mythology the first woman was created from rowan wood (men derive from ash), while rune staves were traditionally carved from rowan wood.

Although any rowan tree is perceived as magically powerful, some rowan is more potent than others and hence especially valued for its gifts of magical protection. These most potent rowan specimens include roan growing near standing stones or stone circles, according to British tradidion, and rowan growing out of cliffs, crevices, or even out of other trees, especially other roan, rather than Earth herself in Scandinavian tradition. This is known as "flying rowan" and is considered most powerful.

Although this is advisable for all trees, because rowan is so powerful and sacred it is extra important to remember to ask permission from the tree and offer a gift or libation before taking any part of it.

Should you be required to enter a place of malevolent energy, sew a bit of rowan inside your clothing to protect against evil entities of all sorts, as well as against evil intentions.

To protect against psychic attack, nail nine sprigs of rowan across the door lintel. As an alternative, wear sprigs, flowers, or rowanberries in your hair or hat.

If you don't have access to a rowan tree, you can use chalk to draw rowan tree berry patterns onto your doorsteps (after they have been cleansed and cleared) to keep away malevolent spirits.

Found in: Encyclopedia of 5000 Spells

Posted by Shirley Twofeathers at 7:49 AM