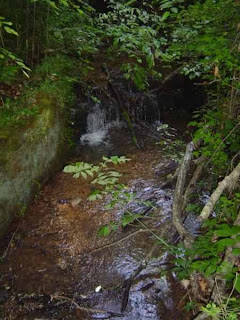 There is something wonderfully magickal about fresh clean water pouring out of rock for no apparent reason. This was especially true in the days before modern plumbing, when water was collected daily from wells, lakes, springs, and other natural sources.

Fresh water was life itself, and in ancient times, rituals were often performed at wells, springs, or fountains. These were the most common places for shrines and altars to be erected. Ishtar, the Babylonian moon goddess, is closely associated with springs. Many of her temples were placed in areas that contained a natural spring.

The modern country of Greece boasts of well over seven hundred natural hot mineral springs. All of them are touted to have a healing effect on the body and regenerative properties due to the presence of natural minerals.

The natural thermal springs as Skala Thermi, on the Greek island of Lesvos, are sacred to Artemis and are recommended for people with asthma, any female problems, kidney and bladder troubles, high blood pressure, or liver ailments.

Many natural springs are connected to dreams. They tend to have a radiioactive quality and cause the visitor to become drowsy. Sleeping at such sites is thought to induce prophetic dreams.

Ponce de Leon, the famous Spanish explorer, spent his life devoted to the quest to find the legendary Fountain of Youth. When he stumbeled upon a natural spring in what is now the city of Saint Augustine, Florida, the thought he had found it. The fountain of Youth was reputed to have magical waters that guaranteed the drinker a restoration of youth.

The Fountain of Kanthos was said to have a special magical power. It was thought to have restored the goddess Hera's virginity on her annual bathing sojourns.

The fountain Elivagar was in the center of Niflheim (the Norse version of the Underworld). Unlike the clean, clear water of most fountains, Elivagar produced a black, poisonous sludge. It fed the eleven rivers of Niflheim.

In China, the fountain at Pon Lai was believed to gift the drinker with one thousand lives. This legend dates back to the Chin Dynasty, circa 265-420 CE.

Bathing in and drinking the miracle waters was a favorite pastime and healing influence in many cultures. The Roman bathhouses emerged as an alternative within city walls to the natural springs in Greece.

Posted by Shirley Twofeathers at 2:41 AM

Don't forget to look for hagstones when visiting natural bodies of water!