A Most Amazing Water Lily 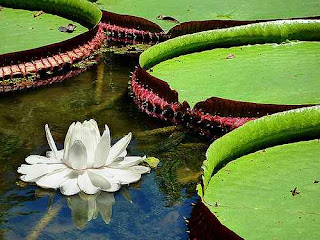 Victoria amazonica is one of the most amazing waterlilies known. It impresses not only by the size of its gigantic leaves which grow up to as much as six feet or the beautiful flowers which may be as large as a foot, but also by the contrivances one observes during pollination.

The flower is pollinated by scarab beetles. As can be seen in the first figure, the pistil of the water-lily lies at the base of a hollow chamber like structure surrounded by the stamens. This hollow chamber hides the reward for the beetles in form of sugar and starches. The flower bud develops under water and when ready to open, it emerges above the water surface between the surrounding leaf pads during day time. However, the buds open only as the sun sets and the white petaled, fragrant flowers draw the beetles. The beetles have to crawl into the inner chamber to get their bounty. As midnight approaches, the flowers start closing in, thereby trapping the insects feasting on them. The closed petals start changing their color from white to pink. 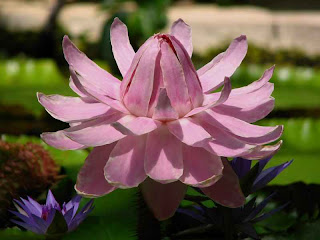 Next day, the flowers reopen with a purplish hue, still entrapping the insects from the night before as the tunnel to the inner chamber remains constricted. With sunset, this constriction is removed and the beetles are able to scramble out of the chamber. But as they move through the anther lined tunnel, the pollen from the now open anthers stick to the sugar covered beetles. The beetles carrying pollen from these flowers will fly out to visit the freshly opened, white colored flowers bringing about their cross-pollination.

To witness this saga of sweet entrapment, watch a very informative and beautifully shot, short documentary by David Attenborough.

Posted by Shirley Twofeathers at 6:10 AM