"...O King, I have given to you your sister Isis,
that she may lay hold of you and give to you your heart for your body."
~Nut
(first mention of Isis in the Pyramid Texts) 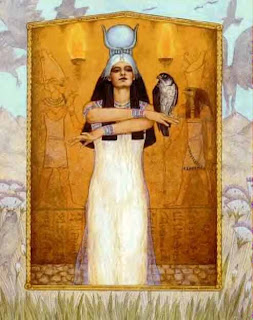 The birthday of Isis falls either on July 17 or July 30. She may be the most venerated goddess on earth. Venerated in Egypt for thousands of years, her worship spread from East Africa throughout Western Asia and Europe as far as England's Thanes River. Statues of Isis even traveled the  Silk Road and may eventually have evolved into Kwan Yin.

Isis is so multifaceted that the Greeks identified her with Aphrodite, Demeter, Artemis, and Persephone. The myth of Isis and Osiris, her beloved twin brother/soul mate, is among the most beloved of all romantic tragedies. Isis is the lady of many names and many forms. She is the beautiful young, privileged princess and the grieving, poverty-stricken widow dressed in rags. She is the greatest sorceress on Earth, in possession of the Ineffable Name, the most powerful word in creation and the poverty-stricken single mother in hiding, forced to beg to feed herself and her son.

Isis is the most compassionate of deities because she has lived the life of an oppressed woman, and she is the most powerful, because as Mistress of Magic, she knows all and can do all. Isis can resurrect the dead and can bestow the gift of fertility. She heals the ailing and protects travelers at sea. There is no miracle that she cannot perform.
Spirit allies: Isis is frequently accompanied by an entourage of spirits, including Anubis, Nephthys, Heket, Min, Bes, Khnum, Selket, and the Scorpion Guardians. She is a friendly, gregarious spirit and will share her altar.

Emblem: The tyet amulet, also known as the buckle of Isis or Blood of Isis is a protective amulet usually formed from carnelian or red glass and representing the goddess' menstrual blood-soaked sanitary pad.
Sacred sites: There is a theory that the name Paris derives from Par-Isis, meaning the barque or grove of Isis. In Roman times, Isis had a temple at the western limits of the city, the marshes on the Left Bank of the Seine. The churches of Saint Sulpice and Saint Germain-des Pres are built over sites once dedicated to Isis.
Iconography: Isis is portrayed in many forms.


Manifestation: Isis is an incredible magician and can take any form she chooses. She may manifest as a cow, kite, or swallow. She may appear as a beautiful queen, a pregnant woman, or a woman absolutely devastated by despair and grief.
From: Encyclopedia of Spirits

Posted by Shirley Twofeathers at 1:40 AM