Today, July 17, is the Festival of Amaterasu. Amaterasu is the beautiful, radiant kami of the sun, but she is more than just the shining sun; she is a great goddess who provides for people and protects them. Amaterasu was the first to cultivate rice, albeit in heaven. (Her grandson, Ninigi, eventually brought rice to Earth from her celestial paddies.) She also invented and taught people the arts of weaving and cultivating silkworms. Rice, silk, fabric, all are gifts of Amaterasu. 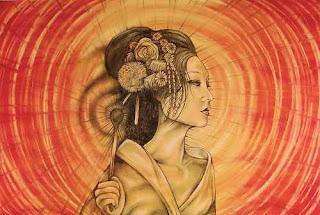 Her most famous myth involves her withdrawal into a cave. Susano'o, Amaterasu's bother, Spirit of Chaos, went on a rampage. He trampled Amaterasu's rice fields, filled her irrigation ditches, and threw excrement into her palace. Amaterasu protested strongly, but Susano'o's response was to profane her weaving workshop by throwing the corpse of a skinned horse, the sacred solar animal, at her weaving maidens. The impact of the horse's body caused one of Amaterasu's handmaidens to fall against her wooden spindle, piercing her vagina, killing her.

Livid, grieving, and just plain disgusted, Amaterasu shut herself up in a cave and refused to come out. The world was plunged into darkness, a never-ending solar eclipse. Despite the pleading and cajoling of various kami, Amaterasu remained in the cave, swearing she would never emerge. Although attempts were made, Amaterasu was too powerful and radiant: she couldn't be forced out. The world began to whither and die. Famine spread.

Eight million despairing kami camped outside Amaterasu's cave and debated what to do. Uzume, Spirit of Joy, hatched a plan. Mounting a drum, she began to dance, distracting the kami, who momentarily forgot their woes and joined in the mirth, laughing, singing, dancing, and drumming. Inside the cave, Amaterasu wondered what was going on. she called out, only to be told that there was a new goddess in town. She poked her head out of the cave to see. Instantly a magical sacred mirror was thrust in front of her: she was entranced by her own beauty. Before she could even think of returning to the cave, she was pulled out and the cave sealed up. After some negotiation, she returned to her previous role, but this time as chief of the Shinto Pantheon.

In Shinto faith, Amaterasu is the prime deity (kami). As supreme deity, it is she who the Imperial Family traces their lineage back to. She is the divine ancestor of the Yamato clan. As they grew in prominence and influence, so did she. Or vice versa. Her grandson, Jimmu Tengu, became Japan's first emperor and founder of the Imperial Dynasty. Although considered the literal ancestor of the Japanese royal family, she is also the spiritual mother of Japan in general. Japan means "Land of the Rising Sun"' the sun on the Japanese flag may be understood to refer to Amaterasu.

Amaterasu's main shrine is the Grand Shrine of Ise (Ise-jingu), located in the center of Japan, south of Nagoya. Her most sacred items -- the sword, the mirror and the necklace -- are kept in the shrine. Shrine rituals are performed all year round in honor of Amaterasu. The cave to which she withdrew, Ama-no-Iwato (Heavenly Cave of Darkness) is in the vicinity, too.

Found in: Encyclopedia of Spirits

Posted by Shirley Twofeathers at 6:42 AM

Email ThisBlogThis!Share to TwitterShare to FacebookShare to Pinterest
Labels: Gods and Goddesses, July Spells and Rituals