Pronounciation: ker-EED-wehn
Other Names: The White Sow, The Old One, White Lady of Inspiration and Death, The Ruler Of Bards, Rvyf Bardoni, Dark Queen Of The Lake, Lady Of The Cauldron, Goddess of Druids and Bards.
Alternate Spellings: Ceridwen, Caridwen, Cereduin, Ceredwen, Kerridwen, Kyrridwen 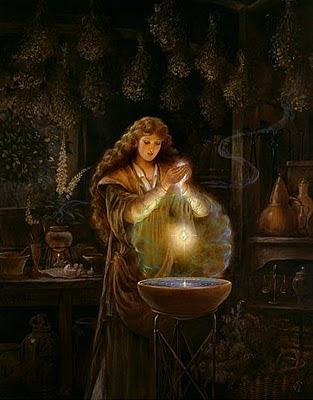 Holy-days: July 3rd - Festival of Cerridwen, Oct 21st - The Day Of Ceredwen
Interesting Fact: Welsh bards once called themselves 'Cerddorion' ("sons of Cerridwen") meaning they received their initiation from Cerridwen Herself.

Cerridwen is a shape-shifting lunar deity, witch, herbalist, and keeper of the Cauldron of Knowledge, Inspiration, and Transformation.

This dark goddess of great wisdom, prophetic foresight, and magical shape-shifting abilities lends us her relentless energy and the focus required to achieve our ultimate goals.

Cerridwen lived isolated upon an island in a lake in a place known as The Land Beneath the Waves. She was married to a giant, Tegidfoel, by whom she has three children. A daughter, Crearwy who was the fairest maiden in all the land, and two sons: One named Morfran ab Tegid, and the youngest son was called Afagaddu which means "utter darkness" - because He was so ugly and deformed. He was known to be the most ill-favored man in all of Wales.

Cerridwen is a good mother; she wishes the best for her children. She believed that Afagaddu was not likely to be admitted among men of noble birth by reason of his great ugliness unless He had some exalted merits or knowledge. So she decides to brew a potion for him to compensate. Once tasted, this potion bestows all knowledge, as well as all magical, oracular, and shamanic powers.

Only Cerridwen knows the formula; it takes a tremendous variety of botanicals, which must be ritually gathered under carefully monitored movements of the sun, the moon and the stars in the sky over the course of 13 moons and then added at just the right moment.

In addition, someone must continually stir the brew, which must be kept steadily boiling for a year and a day. Cerridwen finds a poor, ignorant child, Gwion, to stir the pot. She gives strong instructions to Gwion not to spill anything out the cauldron since only three drops of the brew will be useful to her son. Once the Three Blessed Drops were obtained, these three drops being known as "The Grace of Inspiration" or "Awen", the rest will become poison.

On the last day Gwion accidentally splashes three drops of the hot liquid on his hand as he is stirring and in a movement of reflex he puts his hand to his mouth and sucks on the burn and that very instant, he foresaw everything that was to come, and perceived that his chief care must be to guard against the wiles of Ceredwen, for vast was her skill.

So, in very great fear, He fled towards His own land. The Cauldron then burst in two, because all the liquor contained within it, except The Three Charm-bearing Drops, was extremely poisonous. The horses of Gwyddon Garanhir were poisoned by the water of the stream into which the liquor of the cauldron ran, and the confluence of that stream was called "The Poison of the Horses of Gwyddon" from that day until this.

Enraged, Cerridwen, (remember she is also a shape shifter) chases him. Gwion who now also has the power of transformation, begins to shift as well during this great chase.

"And she went forth after him, running. And he saw her, and changed himself into a hare and fled. But she changed herself into a greyhound and turned him. And he ran towards a river, and became a fish. And she in the form of an otter-bitch chased him under the water, until he was fain to turn himself into a bird of the air. She, as a hawk, followed him and gave him no rest in the sky. And just as she was about to stoop upon him, and he was in fear of death, he espied a heap of winnowed wheat on the floor of a barn, and he dropped among the wheat, and turned himself into one of the grains. Then she transformed herself into a high-crested black hen, and went to the wheat and scratched it with her feet, and found him out and swallowed him."

Now Ceredwen knew at that exact moment that she was now pregnant with the boy Gwion, who was now inside her belly, and she resolved to kill the child as soon as he was born. And as the story goes, she bore him in nine months time; yet, when she was delivered of him, he was so incredibly beautiful and his brow was shining so brightly, that she could not find it in her heart to kill him, by reason of his magnificent beauty.

He was also born with all his memories of all his incarnations, as well as the skills of a Master Bard. Unable to carry out her plan, Ceredwen placed him in a seal-skin bag, and cast him into the sea to the mercy of the Sea God, Manawyddan, on the twenty-ninth day of April. And so it was, that The Great Bard Taliesin - The Radiant Brow, The Twice-Born, made his entrance into this world.

The radiant child Taliesin did not die, but was rescued from the sea by the Celtic Prince Elphin (Elffin), whom Taliesin served faithfully for many years. He grew to become the greatest of all Gaelic poets with the gift of perfect poetry that could blow the seas into a rage, heal all wounds and foretell the events of the future.

Is not my chair protected by the cauldron of Cerridwen?
Therefore, let my tongue be free
In the sanctuary of the praise of the Goddess.

She is the tigress mother, dark goddess, prophetic crone, who pursues her interpretation of justice with unfailing energy. If Cerridwen is speaking to you today, you should also pursue your goal with equal energy (if it’s sure it’s what you want).

If you have invested the energy in the fertilisation of the project you have been nurturing (as Cerridwen did in her magical potion), then so should you equally defend and fight for your right to see it to fruition.

Reconnect With Your Inner Cerridwen:

Carry an orange stone to help Cerridwen’s powers become apparent in you. Become the magickal being you need to be - shape-shift and adopt a totem’s magical properties in order to help you achieve your ambition.

Consider What Would Cerridwen Do?

If she were in your situation, she would she her project through to fruition. She would change her approach to find the path of least resistance. She may even change her appearance - whatever it takes to turn the situation to her advantage.

The story of Cerridwen and her symbols provide us with a wonderful story for transformation and understanding the idea of cycles in our lives and the lives of all things around us, including nature. She beings by trying to take the shadow element of her son and using her cauldron to create a potion of wisdom to transform him.

Here we the concepts of “brewing” knowledge for a year and a day, letting this simmer and marinate and come together during a process of tending to the fires that keep the process going. We then see that, through taking in this knowledge deeply and letting it do it’s work, flowing with it and letting it transform and change us, we have the ability to experience many different things.

We may also find that we need to chase after what we truly desire as a result of desiring knowledge (like chasing down your dreams). Once we make the transformation we may need to let it ruminate some more and nurture and care for our projects or knowledge and then, when the time is right, the fruits of our labor are born.

Cerridwen, while having her dark side, is just as much a mother as she is a crone. Her crone aspect encompasses her wisdom but as a mother she nurtures that wisdom and the growth that it brings. She is an approachable Goddess though, if you come to her asking to be shown knowledge, truth and wisdom in any aspect, whether mundane, magickal or spiritual, she will put you through tests and trials and will make you earn that which you seek. She isn’t a Goddess that hands things out to the ungrateful and she isn’t one that spoon feeds love and wisdom, but for those that are willing to truly seek out the Holy Grail, as her cauldron is sometimes seen to represent, then she will help you uncover it.

Cerridwen can take any form. The big question is not what form she will take but whether or not you will be able to recognize her. She is an occult master; every encounter with her may be considered a test of your knowledge and psychic ability.

Working with Cerridwen will transform you and you will find that your views, your path and your spirituality will be vastly different once you have passed her tests.

Some areas of working that Cerridwen can be helpful with include:

Compiled from various sources including:

Posted by Shirley Twofeathers at 8:45 AM

Email ThisBlogThis!Share to TwitterShare to FacebookShare to Pinterest
Labels: Gods and Goddesses, Myths and Legends

Just came across this post after having Cerdiwen's name suddenly pop into my life. Thank you so much for posting this as it's the best collection of information on her I have found.