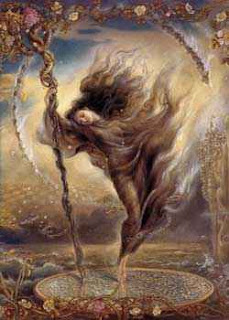 In Romania, Pentecost or the week after, including Trinity Sunday, is the time when the Rousalii, the three daughters of an emperor who were ill-treated during their lives on earth and later became goddesses, set out to cause misery and mischief wherever they could. Traditional Romanian belief holds that during the period from Trinity Sunday to St. Peter's Day (June 29), the Rousalii roam over the earth, causing high winds and storms. People may be caught up in whirlwinds, or children may be snatched from the arms of their mothers if they venture outdoors or travel any distance from home.

On the eve of Rousalii, it is traditional to place a twig of wormwood under your pillow. Because medicinal herbs supposedly lose their potency for several weeks after Rousalii, it is considered unwise to gather any herbs from the fields until at least nine weeks have passed.

A group of ill-treated women in life, these Goddess often create mischief when they interact with humans, especially those with nasty dispositions. They do, however, have a good side. The Rousalii know the dances that make plants and people grow and thrive, and sometimes they will teach them to humans. In literature, the Rousalii sometimes appear as water fairies, begging linen from passers-by, which they use to make green robes for fertility rites.

In Romania, people would tell you that it is best to stay home today and leave the Rousalii offerings of bread and salt to avert their impish ways. If it's windy, definitely stay home; this means the ladies are in a foul mood. To protect yourself, place wormwood under your pillow, pull the covers over your head, and stay put!

On a less drastic level, wear something green to keep them happy and try this spell to encourage the Rousalii's growth or maturity in any area of your life. Take a little piece of linen (or cotton cloth) and dance with it in your hand, moving clockwise and saying:


The dance of life
The dance of power
Rousalii, join me this magic hour!
To _______ bring growth and maturity
By your power this spell is freed!

Fill in the blank with your intention. Tuck the swatch of cloth on your person, or close to the area that represents your goal.

and Answers.com
Posted by Shirley Twofeathers at 2:50 AM

Email ThisBlogThis!Share to TwitterShare to FacebookShare to Pinterest
Labels: June Spells and Rituals