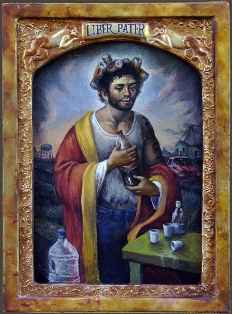 The Liberalia (17 March) is the festival of Liber Pater and his consort Libera. In ancient Roman religion and mythology, Liber ("the free one"), also known as Liber Pater ("the free Father") was a god of viniculture and wine, fertility and freedom. He was a patron deity of Rome's plebeians and was part of their Aventine Triad. His festival of Liberalia became associated with free speech and the rights attached to coming of age. His cult and functions were increasingly associated with Bacchus and his Greek equivalent Dionysus, whose mythologies he came to share.

The Romans celebrated Liberalia with sacrifices, processions, ribald and gauche songs, and masks which were hung on trees.

This feast celebrates the maturation of young boys to manhood. Roman boys, usually at age 14, would remove the bulla praetexta, a hollow charm of gold or leather, which parents placed about the necks of children to ward off evil spirits.

At the Liberalia ceremony the young men might place the bulla on an altar (with a lock of hair or the stubble of his first shave placed inside) and dedicate it to the Lares, who were gods of the household and family. Mothers often retrieved the discarded bulla praetexta and kept it out of superstition.

If the son ever achieved a public triumph, the mother could display the bulla to ward off any evil that might be wished upon the son by envious people. The young men discarded the toga praetexta, which was probably derived from Etruscan dress and was decorated with a broad purple border and worn with the bulla, by boys and girls. The boys donned the clothing of adulthood, the pure white toga virilis, or "man's gown". The garment identified him as a citizen of Rome, making him an eligible voter.

The celebration on March 17 was meant to honor Liber Pater, an ancient god of fertility and wine (like Bacchus, the Roman version of the Greek god, Dionysus). Liber Pater is also a vegetation god, responsible for protecting seed. Liber, again like Dionysius, had female priests although Liber's priests were older women.

Wearing wreaths of ivy, the priestesses made special cakes, or libia, of oil and honey which passing devotees would have them sacrifice on their behalf. Over time this feast evolved and included the goddess Libera, Liber Pater's consort, and the feast divided so that Liber governed the male seed and Libera the female.

On the Liberalia it was tradition for women to bake smaller pieces of flatbread or consecrated cake (liba) on outdoor ovens with different ingredients (e.g. eggs, cheese, oil or honey) and hand it to the people who were passing by. Ancient sources speak of a significant variety of recipes, and the tradition has been retained to this day as part of the Holy Week.

In Germany the Liberalia dish is still known as lebkuchen (“leb-cake”), with leb- derived from the Latin libum. In German Christian tradition the lebkuchen used to be consumed during Lent and the Easter season, but today has almost exclusively reversed its meaning and shifted to Christmas and the Advent. Aside from the wafers, real liba are also served in Spain, the traditional torrijas at Easter made of flour, wine and honey.

This ancient Italian ceremony was a "country" or rustic ceremony. The processional featured a large phallus which the devotees carried throughout the countryside to bring the blessing of fertility to the land and the people. The procession and the phallus were meant also to protect the crops from evil. At the end of the procession, a virtuous and respected matron placed a wreath upon the phallus.

Related to the celebration of the Liberalia is the Procession of the Argei, celebrated on March 16 and 17. The Argei were 27 sacred shrines created by the Numina (very powerful ancient gods who are divine beings without form or face) and found throughout the regions of Rome. However, modern scholars have not discovered their meaning or use.

In the argei celebration, 30 figures also called Argei were fashioned from rushes into shapes resembling men; later in the year they were tossed into the river(s). The origin of this celebration is not certain, but many scholars feel that it may have been a ritualistic offering meant to appease and praise the Numa and that the 30 argei probably represented the thirty elder Roman curiae, or possibly represented the 30 Latin townships.

Other ancient scholars wrote that the use of the bull-rush icons was meant to deter celebrants from human sacrifice, which was done to honor Saturn. Some historical documents indicate that the argei (the sacred places) took their names from the chieftains who came with Hercules, the Argive, to Rome and then occupied the Capitoline (Saturnian) Hill. There is no way at present to verify this information, but it does coincide with the belief that Rome was founded by the Pelasgians and the name Argos is linked to that group.

Source: Wikipedia
Posted by Shirley Twofeathers at 10:38 AM