The Story of Imbolc 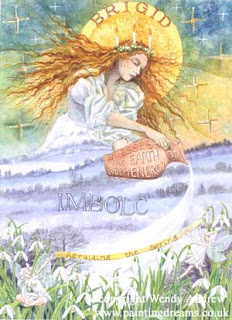 Kate West has written a number of excellent books on witchcraft.
This is what she has to say about Imbolc:

"At Imbolc the spark of light born at Yule becomes a flame to warm people and the land. Now we see the first signs of spring. The trees are in bud and some flowers (snowdrops for example) begin to blossom. The word 'Imbolc' means 'in the belly', whilst 'Oimelc' means 'ewe's milk'. Both refer to the fact that many ewes are pregnant at this time and in a mild year the first lambs will be born about now. Imbolc is the quickening of the year, the time when the Earth is made pregnant with the promise of summer fruitfulness and the harvest to come.

At Imbolc the Goddess casts aside the robes of Wise One and returns as Maiden, dressed in white. In some groups a Maiden will be chosen and will wear a crown of lights and a white robe or cloak for the ritual. It is worth noting that up until relatively recently, the term 'maiden' was used to denote a female who had not yet given birth to child, so that even an obviously pregnant married woman could be a maiden and take this role in ritual. The God, who was reborn at Yule, is now seen as a young man, full of vigour, and his pursuit of the Maiden starts at this sabbath.

Imbolc is the time when the last of Yule's festive evergreens are removed. In some places it is still traditional to hold on to the (undecorated) Christmas fir until Imbolc, when it is taken and burned on the Imbolc fires. These days few of us can afford to keep the tree in place, especially as our modern forced and treated trees find it hard to keep their needles until January, let alone a whole month later. However, there is a practical alternative. As part of your Imbolc celebrations, take all the Yule and Christmas cards you have been given and recycle them, either making them into gift tags for the following year or cutting out the pictures to give to a local playgroup.

In ancient Rome this was a festival of Pan and the priests of Pan, called the Luperci, would run through the streets dressed in goatskin cloth whipping the people, especially women, to make them fertile for the coming year.

In many parts of the British Isles you will find wells dedicated to Bride or to the Christian St Bridget. Originally these would have been associated with the Goddess. If you are lucky enough to live near one of these, or able to visit one, look for a nearby tree with scraps of fabric tied to its branches. This will be a 'wishing tree'. Many people, whether Witches, Pagans or otherwise, visit these places to make an offering to the Goddess in the hope of having a wish granted. Such offerings are usually a strip of cloth, but it is not unusual to see necklaces of plaited grasses, small posies of flowers and even a child's shoe tied to a wishing tree. If you do visit such a site and wish to leave an offering, try to make it something which will soon return to the earth - a small circlet of grass plaited whilst thinking about your wish, or a hair from your own head, offered as a form of sacrifice. Look in your local press for notices of well-dressing celebrations, as many of these still take place at this time of year."

~Kate West
Posted by Shirley Twofeathers at 1:31 AM